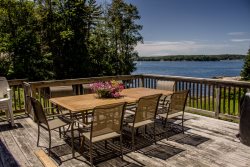 Settled in 1771 and located about 10 miles West of Augusta, Winthrop is a business and service center for the Western Kennebec region. It has a population of about 6,200 that swells in the summertime as people flock to the shores of Cobbosseecontee, Annabesacook and Maranacook Lakes, as well as several sizable ponds. It has a vibrant downtown Main Street area that offers eateries, shops, ball fields, tennis courts, a skate park, town beach, the Norcross Point waterfront park and a public boat launch. With several navigable water bodies, the Mt. Pisgah trail and quiet country roads within the roughly 31-square-mile area, Winthrop offers residents and visitors alike plenty of opportunity year-round to embrace the towns slogan, We Play Outside. One of Maine's traditional Mill towns, Winthrop has a diverse economy and features high-tech, light manufacturing, medical and professional services, tourism and recreational businesses and several local farms that provide food at their farm stands, local farmers market and nearby restaurants. Winthrop draws shoppers from the surrounding towns and commuters that travel between the Lewiston/Auburn and Augusta corridor on Route 202. Additional road access is provided by Maine Routes 133 and 41.
Winthrop also offers a free summer concert series, sidewalk art festival, holiday parades, live music, theater and dance at the Performing Arts Center and a multitude of programs for adults and children at the Bailey Library. Winthrop High School was listed as one of the best in the state in U.S. News and World Reports 2012 guide.