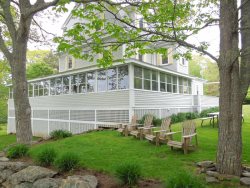 The Town of Brunswick, the gateway to Maine's magnificent mid coast, is an eminently livable community with much to offer residents, businesses, students and visitors. Harpswell is composed of land contiguous with the rest of Cumberland County, called Harpswell Neck, as well as several large and small islands: Sebascodegan Island (locally known as Great Island), Orr's Island, and Bailey Island. Harpswell is part of the Portland-South and Portland-Biddeford, Maine Metropolitan Statistical Area. Bailey Island is an island in Casco Bay, and a part of the town of Harpswell. The world's only Cribstone Bridge is located here and connects Orr Island and Bailey's Island.

Coffee Shops in the Brunswick and Islands Area
View Category